UPDATE: April 19 - The Ospreys Have Landed – The Osprey pair have taken up residence on their new nesting platform. Burlington Hydro is pleased to report that they have successfully and safely re-located. The platform was built to encourage the Ospreys to move from the crossarm of a pole wood support. The new platform provides a sturdy and safe location for the birds to raise their young. 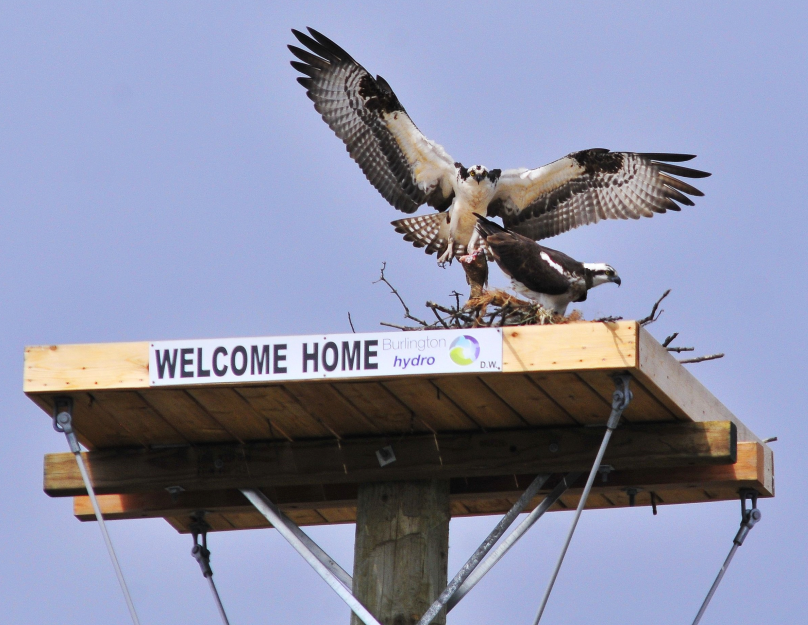 Burlington, ON - The current site of an Osprey nest atop Burlington Hydro poles that support a highway crossing at Highways 403 and 6, is causing safety concerns for the utility. The danger it poses to public safety and the returning Osprey nesting pair has resulted in taking a unique approach that will ensure the safety of both the birds and the public.

“If the Osprey nest were to cause an electrical short by bridging the gap between the conductor and the wood support structure, the arm supporting the conductors could burn through and fail,” says Paul Heeg, Vice President, Operations and Engineering, Burlington Hydro. “We’re very concerned about the potential danger of a conductor falling onto Highway 403 if that were to happen, notwithstanding the danger to the birds.”

Protecting bird habitat and the nesting sites of the Ospreys is a high priority in any actions taken by Burlington Hydro. In collaboration, and with the advice of Conservation Halton and the Ontario Ministry of Northern Development, Mines, Natural Resources and Forestry (MDMNRF), a new pole will be erected close to the current location with a platform at the top to support an Osprey’s large nest. It’s important that this work takes place in advance of the Ospreys returning to the nesting site this Spring. The new platform will provide a sturdy and safe location for them to raise their young.

“Safety always remains our number one priority, for the public in all circumstances, but in this case also for the nesting Ospreys,” said Gerry Smallegange, President and CEO, Burlington Hydro. “Every possible precaution will be taken to protect the integrity of the Osprey nesting site. By erecting a man-made platform nearby, the birds will be encouraged to re-locate safely when building their Spring nest.”

The work to remove the nest from the distribution line and erect the new nesting platform is scheduled to take place shortly.